Understanding how reverse mortgages can add value in retirement planning requires an understanding about the peculiarities of sequence-of-return risk that the reverse mortgage can help to manage. When combined with a long retirement, sequence-of-return risk can lead to some potentially unanticipated outcomes regarding what types of strategies may work to support retirement sustainability. Sequence-of-return risk is a fascinating concept in that minor spending tweaks can have major implications for portfolio sustainability by impacting the amount of investment wealth that remains at the end of the planning horizon. This is the intuition I hope to help you develop in this section, as this will be key to recognizing why the later analysis of reverse mortgages in Chapters 5 to 8 works and is not “too good to be true.” ​

We proceed by examining these peculiarities using an example from the historical data that will serve as a baseline for comparing different reverse mortgage strategies later in the book. In the case study detailed further in Chapter 5, a 62-year-old recently retired couple is working to create a retirement plan that will support their budget for 34 years through age 95. We will consider a simplified version of that case study in which the couple has $1 million of investment assets in a Roth IRA and is seeking to spend $39,485 per year plus inflation throughout their retirement with a balanced investment portfolio of 60 percent stocks and 40 percent bonds. This spending goal is chosen because it will cause their investment assets to deplete fully after covering their spending at age 95, using the market returns from 1962 to 1995.

Sequence Risk and the Impact of Changing the Initial Withdrawal Rate 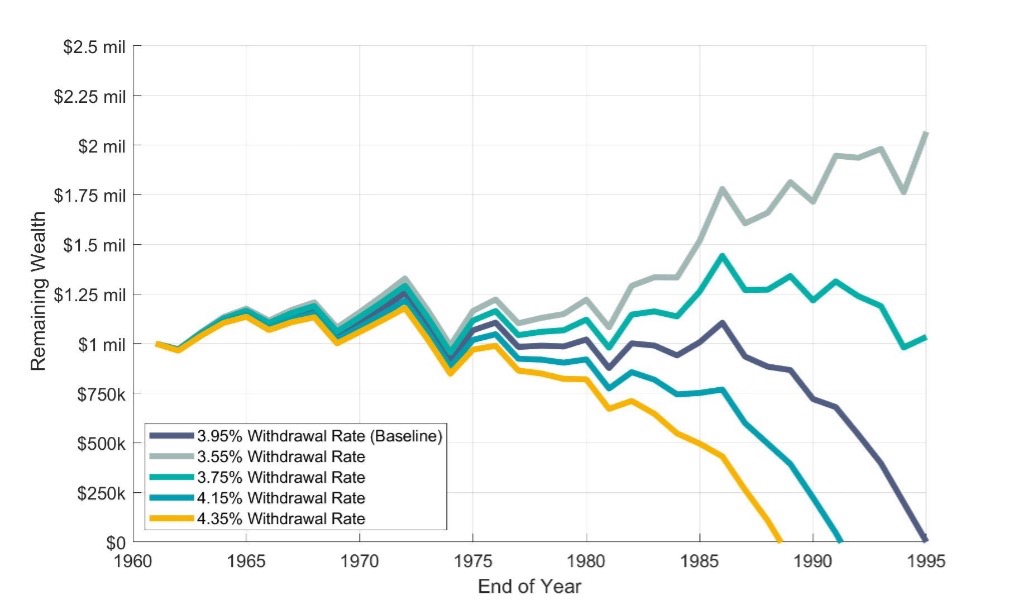 The key lesson is that the peculiarities of sequence-of-return risk cause small changes to the initial distribution rate to have a large impact on portfolio sustainability. An investment portfolio can be better preserved through minor reductions in the distributions taken from it. This does not have to mean spending less in retirement, as a lower portfolio withdrawal rate can be offset by spending from other assets. We will demonstrate how a reverse mortgage can play this role in reducing pressures on the investment portfolio. Possibilities include using tenure payments to cover part of the spending need, refinancing a traditional mortgage into a reverse mortgage to remove this fixed expense from the early retirement years, purchasing a home in part with a reverse mortgage, and using a reverse mortgage to help fund the delay of Social Security benefits.

To better understand the potential synergies created by a “buffer” asset, Exhibit 1.4 highlights how skipping single years of portfolio distributions can dramatically impact the final portfolio balance. The idea is that the external buffer asset provides a resource to cover any skipped distributions from the portfolio, leaving the portfolio in a much better position to rebound. This is based on the same example as previously described, with a 3.95 percent initial withdrawal rate causing the $1 million portfolio to deplete in 1995 if all 34 distributions are taken, with a retirement based on market returns starting in 1962. With these historical returns, the investment portfolio lost 7.4 percent in 1969, 8.6 percent in 1973, and 11.1 percent in 1974. If the retiree skipped taking the distribution in only 1970, which is the year after the 1969 market drop, and took the other 33 distributions, there would still be $710,197 left to spend at the end of 1995. By skipping the distribution only in 1974, after the 1973 drop, there would still be $687,922 at the end of 1995. If this couple instead skipped the 1975 distribution, reflecting the year after the 1974 drop, then $865,116 would remain in 1995. Going further with this, if the couple skipped all three of these distributions, they would wind up with $2.26 million remaining in 1995 instead of $0. These are big differences, but they are not even as big as could be shown with other historical examples, as the sequence risk impact on these years is relatively mild. The first notable market drop did not happen until the 8th year of retirement.

Nevertheless, skipping one distribution helped keep the portfolio on course and avoided the ongoing distribution rate from accelerating to unsustainable levels as remaining portfolio wealth declines. This sequence risk synergy provides a second means for understanding how a reverse mortgage could help to support retirement spending. Instead of just skipping the distributions for these years, the couple could source them from a line of credit on a reverse mortgage. This provides a sophisticated technique to grapple with sequence-of-return risk by only spending from the reverse mortgage when the retiree is vulnerable to locking in portfolio losses. The portfolio coordination strategies described in Chapter 5 will show how to treat the reverse mortgage line of credit as a buffer asset to help protect the investment portfolio from sequence risk. 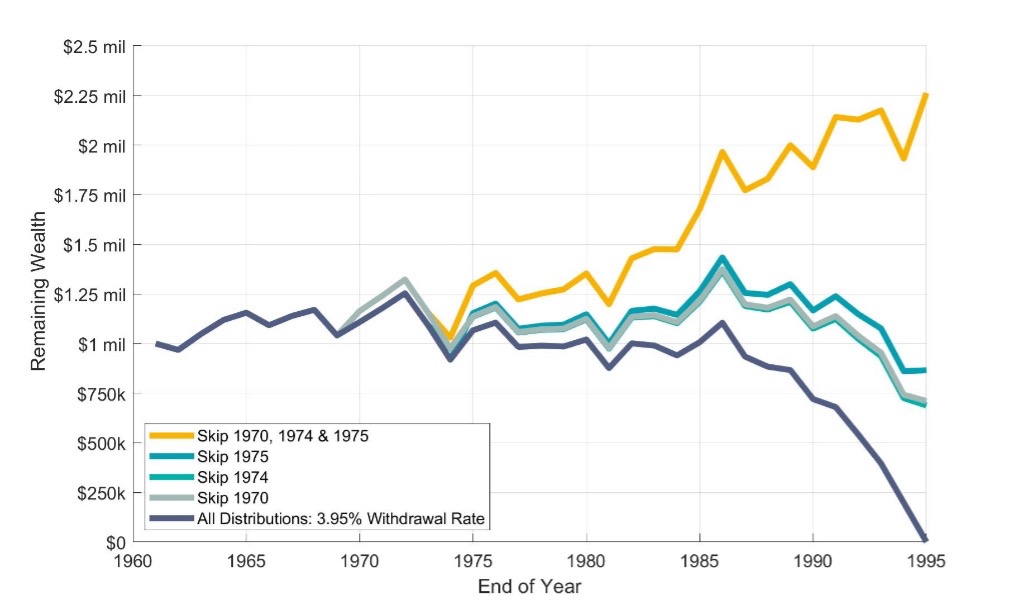 The reverse mortgage creates costs in terms of initial setup costs and the ongoing loan balance growth for the borrowed amount, but the intuition shown here helps to explain how the reverse mortgage can contribute significant value by helping to manage sequence risk and preserve the investment portfolio, such that the benefits are able to exceed the costs.

In isolation, a reverse mortgage can look expensive. But it should not be viewed in isolation. It is a piece of a larger puzzle that retirees are trying to solve. Reverse mortgage costs can be offset by gains elsewhere in the overall financial plan through the ability to help manage sequence-of-return risk. With the example in Exhibit 1.4, for instance, if the loan balance for a reverse mortgage used to fund the retirement spending in 1970, 1974, and 1975 is less than $2.26 million, then beneficiaries can pay the loan balance and still have more left over in their investments to support a larger overall legacy. This is the type of scenario we will put to the test in later chapters. The punchline: Strategic reverse mortgage use can work to protect the investment portfolio from incurring excessive distributions by helping to manage the erratic behavior caused by a market downturn on a retirement spending plan funded through a volatile investment portfolio.

Wade D. Pfau, Ph.D., CFA, RICP, is the curriculum director of the Retirement Income Certified Professional program at The American College in King of Prussia, PA. He is also a principal and director at McLean Asset Management and RetirementResearcher.com. Brought to you and your financial advsior by Scott Underwood and Reverse Mortgage Alabama. Scott has over 15 years Reverse Mortgage experience and can work with you in Alabama, Georgia, Florida, and Mississippi. Call me to learn more about using a Reverse Mortgage for retirement planning.

**The owner(s) retain title to the property that is the subject of the reverse mortgage until the person sells or transfers the property and is therefore responsible for paying property taxes, insurance, maintenance and related taxes. Failing to pay these amounts or failure to maintain the condition of your property may cause the reverse mortgage to become due immediately. A reverse mortgage is a complex loan secured by your home. Whether such mortgage makes sense for you depends on your financial situation and needs. For these reasons, you are required to consult with a qualified independent housing counselor and include family members and other trusted advisers before making this decision. This information is not from HUD or FHA and was not approved by HUD or any government agency.